What’s that rising out of the depths of Lake George in the southeastern Adirondacks? Is it a lake monster? No, it’s the area’s newest attraction – submarine tours! Prepare to embark on the journey of a lifetime through the mysterious underwater world of the “Queen of American Lakes.” 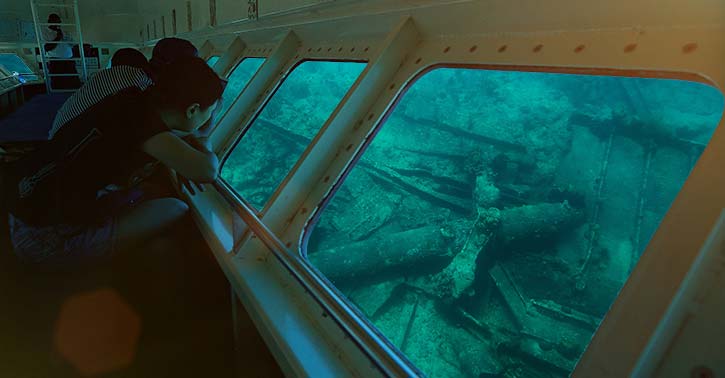 All Aboard the Submarine

The company in charge of this exciting new underwater attraction, Lake George Submarine Voyages (LGSV), has recently laid out their plan for the tours. They will be conveniently based in southern Lake George, right near the village, and the submarine will take passengers up and down a section of the beautiful lake.

For those of you who remember the original 20,000 Leagues Under the Sea attraction (1971-1994) at Walt Disney World’s Magic Kingdom, this will be like an underwater trip down memory lane!

The company’s flagship submarine, La Reine (The Queen), will be 60 feet long and feature benches on both sides of the indoor viewing area. Multiple portholes and exterior lights will allow you to see what lurks within the clear waters of Lake George.

Here’s What You Can Expect

Having been influenced by Disney’s submarine attractions and the tours offered in the Caribbean, LGSV designed La Reine to provide maximum comfort and entertainment. The submarine is air-conditioned, stocked with brochures about Lake George’s underwater life, and has an experienced captain and tour guide who will narrate your journey.

While part of the submarine will remain above water (for safety reasons), passengers will be under the water and have an opportunity to see all kinds of cool sights, including shipwrecks, indigenous fish, and who knows what else? Each adventure will run from 60-90 minutes, depending on the departure time.

Mark Your Calendar For Summer 2018

The first submarine tours of Lake George are expected to kick off this summer season! Stay tuned for more details on how you can reserve your seat for this underwater adventure.

*April Fools! Unfortunately, submarine tours are not coming to Lake George at this time; better get your scuba gear instead!