What could be a better backdrop for an exhibit on the history of law enforcement than old jail cells?! The Lake George Historical Association Museum is dedicating a new exhibit this month, and 170-year-old cells are just one of many highlights. 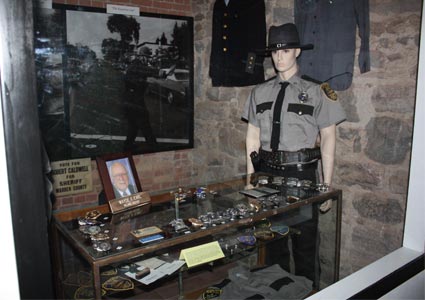 When Warren County was created in 1813, Lake George was selected as the county seat. It’s believed court was held in the Lake George Coffee House for four years. The first county courthouse was built in 1817, but it burned down in 1843. The Old Warren County Courthouse Complex was built two years later. One of the primary features of the Courthouse Complex? That’s right – dark, dank jail cells located in the basement.

Many prisoners were held, tried, and convicted there for more than 100 years. In 1963, the Courthouse Complex was abandoned when a new municipal center was constructed south of Lake George Village to better fulfill Warren County’s needs.

The Lake George Historical Association (LGHA) took control of the site about five years after its abandonment, and from then on, the group has worked to preserve the old courthouse and turn the historic building into a museum.

The soon-to-be-dedicated exhibit focuses on Lake George’s police force, started in 1908, and the Warren County police force it ultimately merged with in 1988. The exhibit contains photographs, uniforms, newspaper clippings and other memorabilia.

In an interview with The Post-Star, Scott Bauberger, a member of the LGHA Board, mentioned he’s particularly interested in discovering more on former Lake George police chief Dewey Sims, who took control of the Village force in 1969. “As far as I can see, Dewey Sims was the first African-American police chief in New York state, according to everything I’ve researched,” Bauberger said. “New York City I know claims it.”

Interested in witnessing this one-of-a-kind exhibit for yourself? You can start by attending the dedication ceremony on May 21, at 11:00am! If you can’t make it to the ceremony, you can visit the museum on Saturdays and Sundays, Memorial Day through June 11, from 11:00am-4:00pm, and additional times during the summer season.