The inaugural Adirondack Wine & Food Festival in June 2015 was a resounding success, offering attendees the opportunity to sample craft beverages and locally-produced foods on the shore of picturesque Lake George. During a highly-anticipated preview event yesterday, Adirondack Festivals LLC officially announced details about the second installment of the Festival! 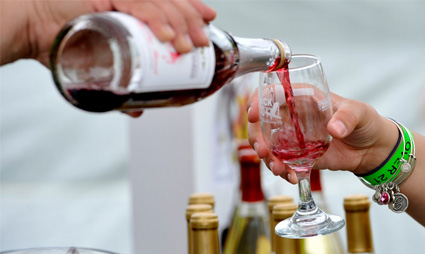 The 2nd Annual Adirondack Wine & Food Festival will return to The Festival Commons at Charles R. Wood Park on June 25 & 26, 2016. More than 50 craft beverage producers and specialty food vendors are expected to be on hand to offer samples of their fine products to festival-goers.

2,500 people attended the two-day festival in 2015, but this year, event organizers have set a more lofty goal. “Our goal for 2016 is 5,000 attendees,” said Stephanie Ottino, Festival Coordinator, in a statement. Last year’s event was impacted by heavy rains, so hopefully Mother Nature will cooperate this year!
The Adirondack Wine & Food Festival is unique in that it not only draws thousands of people to the Lake George area, but also benefits the food and beverage producers that sell their products at the festival. Because of this positive impact, the festival was awarded significant funding from Governor Cuomo’s $3 million Craft Beverage Marketing and Promotion Grant Program.
“We are excited to report that the Adirondack Wine & Food Festival is receiving generous support from New York State’s ‘Taste New York’ Program, with a $63,000 grant,” said Sasha Pardy, owner of Adirondack Festivals LLC, in a statement. The event was also awarded $15,000 from the Warren County Occupancy Tax Committee and the Village and Town of Lake George.
The funding is being used to expand marketing efforts to reach more potential attendees throughout New York State and beyond.
For the second year, the festival’s designated beneficiary will be the SUNY Adirondack Foundation. “We wanted the festival to be connected to a great, local cause that was also related to Wine and Food,” said Pardy. “What better group to work with than SUNY Adirondack, which has a growing Culinary Arts Program.”
So far, 15 wineries, 3 breweries, 4 distilleries, and 2 cideries have committed to the event, with more expected to join in the weeks leading up to the festival. Tickets are currently on sale for a discounted price of $25, and will increase to $35 at the gate.
We can’t wait to see what the 2nd Annual Adirondack Wine & Food Festival has in store this summer!