After the two-year pilot program that made boat inspections mandatory for anyone wishing to launch into Lake George proved to be a successful way to prevent aquatic invasive species from entering, the Lake George Park Commission has decided it will draft a proposal to make the inspection and decontamination program permanent. 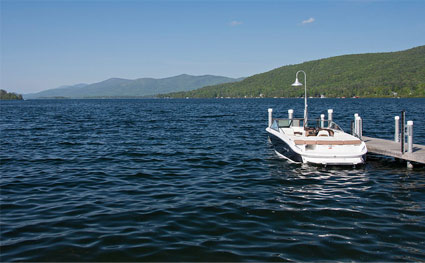 The Post Star reported that Lake George “was the first lake on the East Coast to have mandatory inspections,” which were offered to boaters free of charge. If a boat was determined to be harboring invasives, decontaminations were also performed for free.

The program and its seven inspection/decontamination stations cost $668,000 in 2014 and $576,000 in 2015, with the permanent program expected to cost approximately $520,000 in 2016. In the past, funding has come from the S.A.V.E. Lake George Partnership and New York State’s Environmental Protection Fund. Stations are open until December 1 this year, but would tentatively be in operation from May 1 – November 1 next year.
This year alone, The Post Star reported that 93 invasive species were caught before their boats entered the lake, and 40 samples are still undergoing analysis. 144 invasives were confirmed in 2014. One of the inspections caught water chestnut, an invasive species that was previously eradicated from Lake George, but would’ve been re-introduced without the inspection program. There are currently five known types of invasives in Lake George: Eurasian milfoil, zebra mussels, Asian clams, curly-leaf pondweed, and spiny waterflea.
Lake George’s admirable fight against aquatic invasive species has been such a success that a similar inspection program has been instituted throughout the Adirondack Park for boaters to take advantage of on a voluntary basis.
Source: