The Great Escape won’t be sitting idle this winter! President Eric Gilbert recently announced that the park has significant plans for the offseason, including the addition of a new thrill ride. 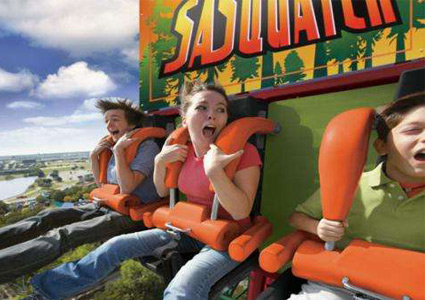 The new attraction, “Greezed Lightnin’,” will be “a ‘looping coaster’ ride, in which passengers are sent into a series of loops, with ‘significant hang time,'” The Post Star reports. The 70-foot-tall ride, the park’s seventh coaster, will be located near Thunder Alley between the Sasquatch (pictured above) and Boomerang rides.

Six Flags’ website says that “Greezed Lightnin'” riders can expect to “swing back and forth pendulum style up each side of the [seven-story] loop, and then flip completely upside down during a series of stomach-tightening 360-degree looping revolutions.”

The park also has plans to update its Thunder Alley area to emphasize the 1950’s theme.

Check out the video of the coaster, and get pumped for the 2016 season at The Great Escape!