The new Festival Space at Charles R. Wood Park is pretty solidly booked this summer with concerts, festivals, fairs, and other events, but the venue may have just scheduled the season’s headliner. Folk musician Arlo Guthrie will be performing in the park on Sunday, August 23, according to The Post Star. 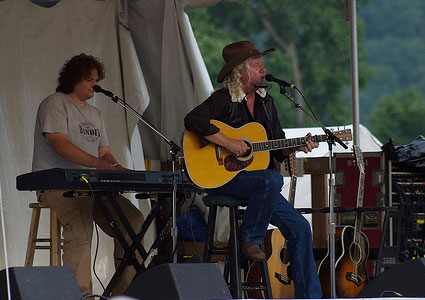 $6,000 in bed tax funds has been set aside by the Town and Village of Lake George for the purpose of promoting the concert. The Post Star reports that Guthrie, best known for his songs like “Alice’s Restaurant” and his 1969 Woodstock performance, has played in Saratoga Springs a number of times and will be the perfect act to “put Charles R. Wood Park on the map.”

Steve Miller Band, most famous in the 1970s and 80s, was also considered for a gig this summer, but was ultimately ruled out due to crowd control concerns.
The venue holds a maximum of 3,000 people and is currently under construction at the former Gaslight Village site. The park is expected to be open and in shape for hosting events by the start of summer.
Tickets for Arlo Guthrie’s performance are now available online.
Source:
The Post Star