The Lake George Park Commission is pushing for a boat decontamination station at Norowal Marina this summer, despite being accused of singling out just one boatyard on the lake. The Park Commission’s Committee on Invasive Species would like to try out the boat washing and decontamination program this spring, in hopes of making it mandatory for boaters on Lake George in the future.

Lake George has seen an influx of invasive species over the last few years, including the Yellow Iris and the Asian Clam. The program suggested by the Lake George Park Commission will offer inspections for invasive species, as well as a boat wash (costing between $25 – $35). Some hope this becomes mandatory protocol for putting your boat in the lake, but the program will be voluntary this year. 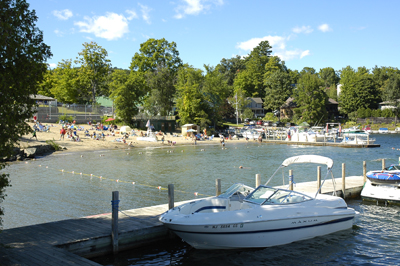 The plan will be quite costly, the Park Commission is hoping for $300,000 in funding from the state Environmental Protection Fund. The decontamination machine itself costs $40,000. Inspections will be carried out by the Lake George Association’s stewards, and will cost the Park Commission another $27,000.

There is some debate on the issue from Norowal Marina. They feel that they are being singled out (the only marina on the lake testing a boat decontamination program) and that long lines will cost them valuable business in the busy summer months.
NYSDEC (Department of Environmental Conservation) is not on board with the proposed program. DEC runs the other two busiest marinas on the lake, and are not being forced to test out the program at their boatyards.
Park commissioner and committee member, Joe Stanek is afraid of what happened on Lake Mead in Colorado a few years ago. Officials tried to implement a similar decontamination system in Colorado, and there was a lot of debate and disagreement over the issue. Lake Mead is now infected, and Colorado has since initiated an inspection and decontamination program across the state.
What do you think of the voluntary program this spring/summer? Do you think it is right to start with this one marina? Would you like to see this program become a requirement for putting a boat in the lake?