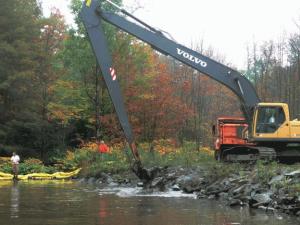 We’ve spent a lot of time in this blog talking about permeable pavement and lake friendly landscapes. But there’s one very important area in the LGA’s efforts that I don’t think visitors to our area EVER see. And I don’t think many area residents know about it either. It’s all the clean up work that’s done upstream of Lake George. 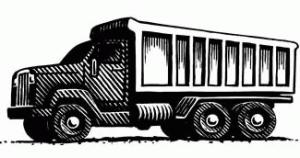 The LGA partnered with the Warren County Soil and Water Conservation District (WCSWCD), the town of Hague, and the town of Bolton on the project, keeping all that gunk out of the Lake.

As water flows downstream it carries sediment with it. The sediment can settle out at the mouth of the stream, introducing contaminants and creating deltas in Lake George. By slowing the flow of the water, sediment basins allow the sediment to drop out of suspension and be captured before entering Lake George. But in order for the basins to work properly, they need to be cleaned out every couple of years.

A 65-foot-long reach excavator was rented for two weeks to complete the work. Each town contributed money and trucking services toward the project. WCSWCD provided project oversight with the assistance of the LGA.

In addition to cleaning out the upland basin in Hague, the flow of the stream into the basin was realigned. In the process, some small pools were created so that fish could migrate upstream, similar to a fish ladder. (That also sounds lake friendly!)

In Hague a total of four basins were cleaned out, including two basins on Hague Brook, one on Jenkins Brook, and a fourth across the street from the town beach parking lot. In addition, the public boat launch area was also cleaned. A total of 715 cubic yards of material were removed from the Hague sites. The Hague highway department hauled all of the sediment; Morrissey Construction did the excavating.

In Bolton, just over 600 cubic yards of material were removed from four basins. The basins were located on Finkle Brook, Huddle Brook, and Indian Brook. Bolton Highway Department handled all of the trucking and Morrissey Construction did the excavating. Reale Construction transported the excavator from site to site daily. 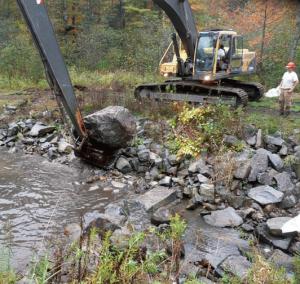 ”This is truly a team effort with all of the parties involved,” says LGA Executive Director Walt Lender. ”It is really great to have the municipalities support the cleanouts every year and Jim Lieberum from Soil and Water did an excellent job working with Randy Rath, LGA’s project manager, to coordinate all of the logistics of the entire effort including project oversight.”

What to know a bit more about sediment basins? Read on!

As water flows down a stream it carries sediment with it. When it enters Lake George, the sediment settles out at the mouth of the stream, creating deltas. These deltas impede fish migration, act as bedding areas for nuisance aquatic species, hinder recreational activities such as swimming and boating, and force property owners to extend their docks.

In the early 1990s, an active program of utilizing upland in-stream sediment basins to capture sediment began in Warren County, spearheaded by the Warren County Soil and Water Conservation District. The LGA provided project support and partial funding for several of these projects as well as funds to help maintain the sites. Old reservoirs were cleaned out and new in-stream sediment basins were created. By slowing stream velocity, basins allow sediment to drop out of suspension and be captured by the basin prior to reaching Lake George.

The sediment comes from the streambed and banks, as well as from roads, development and logging. Once sediment reaches Lake George, it is difficult to remove. Dredging deltas of any significant size requires the approval of the many regulatory bodies as well as significant funding for the physical removal.