Well, recently I wrote about some of the GOOD zooplankton that are swimming around with all of us in the Lake.

Unfortunately, today I am writing about one that is not so good – an invasive zooplankton called spiny water flea.

It was found in Lake George on July 27.

HOW WAS IT DISCOVERED?
An angler leaving Lake George on Friday, July 27 noticed that a mass of material had collected on his line. He showed the material to the LGA Lake Steward on duty at the Mossy Point Boat Launch in Ticonderoga. The Lake Steward collected the sample. Larry Eichler at the Darrin Fresh Water Institute in Bolton Landing later confirmed it as spiny water flea. (Picture above is courtesy of Larry Eichler.)

WHAT IS IT?
Not an insect, the spiny water flea is actually a type of crustacean. 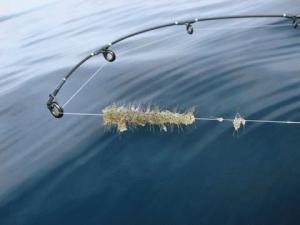 While not technically microscopic, it is still very small. Only a half-inch in size, about 70% of its length is a thin barbed tail. Each individual spiny water flea is 10 times larger than a native water flea, according to the Massachusetts Dept. of Conservation and Recreation.

Many spiny water fleas look like bristly masses of jelly with black eye spots when tangled on fishing lines, reels and other equipment. (The picture above, courtesy of Jeff Gunderson of Minnesota Sea Grant, shows a clump of water fleas on a fishing line.)

Spiny water fleas can have a huge impact on aquatic life in lakes and ponds due to their rapid reproduction rates. In warmer water temperatures these water fleas can hatch, grow to maturity, and lay eggs in as little as two weeks. Other eggs may “rest” and can remain dormant for long periods of time prior to hatching.

HOW WAS IT INTRODUCED?
We can’t know for sure. Most likely an adult, larvae, or eggs were introduced into the Lake by a bait bucket, bilge water, live well, boat, canoe, kayak, trailer or fishing gear.

WHAT WILL BE THE RESPONSE?
It is still too soon to know how widespread the infestation is. The LGA is working with the Lake George Park Commission, Darrin Fresh Water Institute, NYS DEC, and our partners to coordinate additional sampling so that we have more information.

Currently there is no successful means to control or eradicate spiny water flea. Preventing its spread around the Lake and to other waterbodies is the only means for reducing its impact.

WHAT WILL IT COST?
Spiny water flea comes on the heels of Lake George’s latest invader, the Asian clam, discovered in August 2010. This latest finding brings the count to five aquatic invasive species in the Lake George: zebra mussels, Asian clam, Eurasian watermilfoil, curly-leaf pondweed, and now spiny water flea. Millions of dollars have been spent on managing invasive species in Lake George to date, with over $1 million already spent in Asian clam eradication and containment efforts in just the past year. While this invader will not demand large sums of money for management efforts, that news is not as good as it seems. This latest discovery might not cost a lot to manage, but that is only because there is no known way of fighting it at this point.

WHAT CAN INDIVIDUALS DO TO HELP?
The only way we can fight this latest invader is to PREVENT ITS SPREAD to other parts of the Lake. (Anglers and boaters need to keep up their guard and double check their equipment upon leaving one area of the Lake and heading to another.) We must also prevent its spread to other waterbodies. You can help by supporting the LGA’s educational efforts, and by following these important practices when boating and fishing:

After boating, before you leave the launch:

Clean:
Remove all visible plants, animals, fish, and mud from your boat, trailer, or other equipment and dispose of in a suitable trash container or on dry land.

Drain:
Drain water from bilge, live wells, ballast tanks, and any other locations with water before leaving the launch.
Before you arrive at the launch to go boating:

Dry:
Dry your boat, trailer, and all equipment completely. Drying times vary depending on the weather and the type of material. At least five days of drying time is generally recommended during the summer.