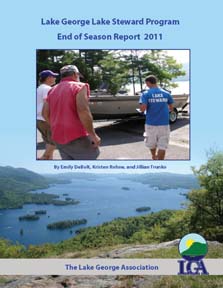 Check out the LGA’s findings from the 2011 Lake Steward program.

The steward program seeks to protect the Lake from the introduction and spread of invasive species.

These invasives can negatively affect our ecosystem, our property values, and our tourism-driven economy. You can download the free report from the LGA website: www.lakegeorgeassociation.org.

Since 2006, lake stewards have inspected boats at high traffic launches and have educated boaters on how to prevent the spread of invasives.

– Within two weeks of their launch in Lake George, boaters had visited 193 unique waterbodies located in 15 different states.

– Other than Lake George itself, the next most frequently visited waterbody was the Hudson River, a waterbody with 91 different invasive species; 100 boats inspected had been in the Hudson within two weeks prior to launch in Lake George.

– 171 aquatic organism samples were collected from 125 boats and trailers; 87 samples were identified as invasive species.

– 75% of boaters reported taking spread prevention methods before launching in the Lake.

We find that most boaters are quite willing to have their boat inspected and are quite appreciative of the stewards’ efforts to keep Lake George free of invasive species.