Plan Lake George Fun On LakeGeorge.com!
Find a Business Enter Giveaways Advertise
Note: LakeGeorge.com is not responsible for posts and comments written by non-staff members.
Home  »  Uncategorized  »  So WHY is a little ASIAN CLAM so bad for the Lake anyway? 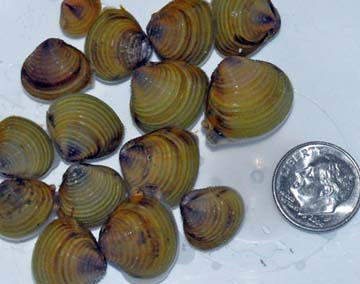 The Asian clam is not a lake-friendly creature.

If you haven’t heard yet, Lake George has this nasty new resident — the Asian clam. It’s an invasive species that was first discovered in the Lake in August of 2010. They are now present in five locations in the Lake: off of Lake Avenue and Shepard Park in the village, Boon Bay, Treasure Cove, and Norowal Marina.

Even though there’s been quite a lot written about this creature in the local press, I have the feeling that some folks might still be a little fuzzy as to WHY this dime-sized little clam is so BAD. And why we really do need to spend hundreds of thousands of dollars to get rid of it.

The Asian clam poses a threat to the Lake’s environment and ecology that is more serious than any aquatic invader we have faced before.

There are 3 main reasons why it is bad:

1. The high concentration of nutrients excreted by the clams drives the growth of algae. Slimy green algae blooms could dominate what are now clear and beautiful bays.

2. The clams quickly form dense mats of sharp shells in shallow sandy areas… not at all friendly to the feet of swimmers.

3. The clams can create localized calcium-rich environments that are more friendly to other invaders, such as quagga and zebra mussels, enabling them to thrive. One reason zebra mussels have been so easily contained on Lake George is because of low calcium levels in the Lake. Zebra mussels are really nasty in terms of what they do to water intake pipes, boats, and lake surfaces — clogging them up and making surfaces sharp, dangerous and uninviting.

In Lake Tahoe, action was delayed for several years allowing their Asian clam infestation to rapidly grow from just a few acres to over 200 acres, making eradication impossible. (The picture above shows their infestation.) Tahoe has spend $1 million to date just RESEARCHING how to MANAGE the clam.

The LGA and its partners on the Asian Clam Rapid Response Task Force took a lesson from Tahoe, and we didn’t wait. The Task Force has been actively participating in an eradication program. We think we can be successful, and in the long run spend much less money to protect our beautiful Lake.

How did the clams get here? No one knows for sure. Could have been through an aquarium dump, a bait bucket dump, or bilge water from a boat. The clam is LEGALLY sold throughout the United States (but can no longer be transported into Warren County, thanks to the new recently-passed law – a first of its kind in New York State.)

Naturally, many marina owners and boat sellers are concerned about the implications of the new law for their businesses. Earlier this week, LGA Education Director Emily DeBolt was invited by the members of the Eastern New York Marine Trades Association to speak. The ENYMTA members wanted to learn more about invasive species, and how to better protect New York’s waterways. See Emily’s presentation here. (This is a large pdf file… it will take a while to download!)

What can you do to help?
1. Make sure you thoroughly clean your boat and fishing gear. Remove all and any dirt, plant, or animal material before launch.
2. When fishing, be sure to follow baitfish regulations.
3. Don’t ever dump an aquarium in a water body, and don’t support a marketplace for invasives by stocking invasives in your aquarium.
4. Support the efforts of the LGA to fight this invader and others by becoming a member, or sending us a special donation to help fund the fight.
5. Become familiar with what the four invasive species currently in Lake George look like (Asian clam, Eurasian Watermilfoil, Curly-leaf pondweed, and Zebra mussel). Notify us if you see anything suspicious.

Want to learn more about the Asian clam and what’s happening on Lake George to fight it? Visit the Asian Clam Task Force website.