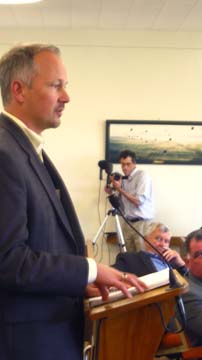 The Lake George Association is very grateful to Warren County for passing a new invasive species transport law – the first county in all of New York State to do so.

The law makes the introduction and transport of aquatic invasive species into Warren County waterbodies illegal.

This new law is SO important because Lake George is SURROUNDED by INVASIVES. The Great Lakes have 184, the St. Lawrence River 87. Lake Champlain has 49, the Hudson River 91. Lake George has only four.

The LGA spent several weeks providing information to the supervisors to help them draft the law. We commented on the pubic hearing about the law. (See LGA Executive Director Walt Lender here in the photo.)

The LGA also recently represented the Lake George region at a state assembly hearing in Albany regarding invasives. We urged the state legislature to quickly move forward to ban both the TRANSPORT and the SALE of invasive species.

Our latest invader… the Asian clam… poses the most serious threat of all to Lake George’s environmental, recreational and economic health. It was most likely introduced into the lake by the simple act of someone dumping an aquarium or bait bucket, totally unaware of the trouble that would ensue. 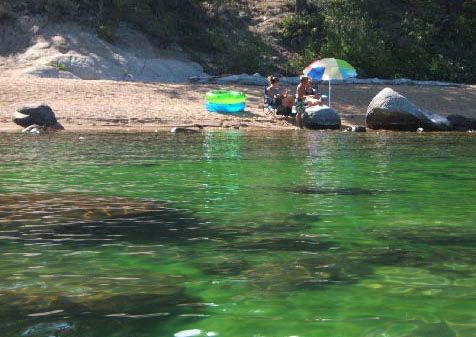 Asian clam is legally sold all over the United States at aquarium stores and bait shops, yet can very quickly wreak havoc in lakes like Lake George – filling the bottom of sandy bays with sharp shells, clogging water intake pipes, reducing the phytoplankton and zooplankton that fisheries need to thrive, providing excrement that feeds large slimy algae blooms, and increasing calcium levels, making a more inviting environment for other invasives, like Zebra mussels.

When the clam was first discovered last August, a task force was quickly formed to study options for battling this invader.

The task force took as its warning the devastating experience of Lake Tahoe, where the clam was discovered in 2002, but action was delayed until 2008. (The bottom 4 pictures here show Lake Tahoe, and are courtesy of Brant Allen of UC Davis.) Tahoe’s infestation rapidly grew from just a few acres to over 200 acres.

Now Tahoe’s beaches have dense mats of sharp shells and algal blooms dominate what were once beautiful and clear bays. Eradication there is now impossible and they spend hundreds of thousands of dollars just “managing” the problem. 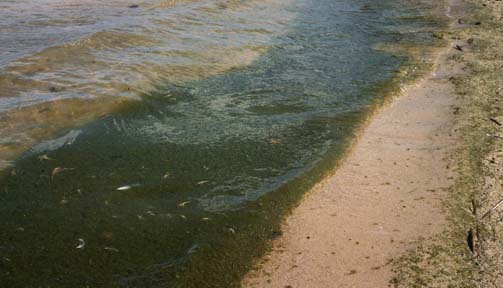 With the new Warren County law, we hope people will now pay closer attention to the threats of invasive species, both environmentally and economically. We don’t want them, and the LGA is doing everything we can to fight them!