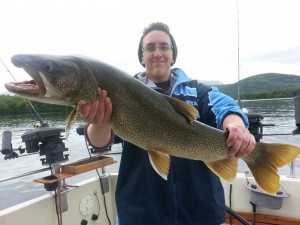 This is a story of a young man’s quest to catch the biggest fish of his life. John Paul had called me about a month earlier to inquire about taking a charter over the Memorial Day weekend. After confirming his date, he had lots of questions. “You think we’ll catch anything?” “Sure we will”, I said. “You sure? ” . “Yeah, I’m pretty sure.” I said. “How big you think? ” ” Hopefully we’ll get some over two feet”. “Two feet, you’re kidding me?” I couldn’t help but start laughing. He was so excited and we hadn’t even started fishing yet. He called back to others in the room and said, “he said we might catch one over two feet. I never caught anything more than 15 inches …this is going to be so cool. I can’t wait. ” “OK see you on Sunday the 27th, 7 a.m. JP” He assured me he’d be there. I hung up laughing.

As I mentioned earlier, weather conditions had been lousy all weekend. JP’s mom called the night before to confirm the trip. The rest of the party had backed out but JP really wanted to go. So did I. Temps were supposed to rise during the day and the wind and rain were to subside as well. We’d had a full moon and I was thinking positive. I really wanted to make this young man have a great day of fishing. At 7 a.m. it was JP, his mom Patricia and myself. The rest of the party had backed out. They will regret it.

Within minutes of setting out the downriggers the first one popped. FISH ON! JP bolted to the rod and played the fish exactly as I had instructed him to. We were only using 6-pound test on custom made Highliner noodle rods. You can’t horse the fish or set the hook. Slow and steady pressure is the rule. JP’s first fish came to the net. About 22 inches. JP was pleased. “I can’t believe it- that’s my biggest fish ever Take my picture,” he shouted. For the next several hours the rods kept popping and JP kept adding new size records to his “fish caught” list. It was really rewarding as a Captain to be providing such joy to a young man”what do you say we spend the next hour looking for a big one, JP?” “Bigger than these?” “Yeah, I said. Let’s do it.” I pulled the lines and headed north.

Shortly after setting up, the rod popped. It was the biggest one yet, and JP of course was thrilled. The next one was also a good one. I was about to pull up the lines and head back when the right rod popped. JP sprang into action. Suddenly, line started screaming off the reel. I threw the boat into neutral ….the line kept t going out. . Darn, snag I thought. The line stopped coming off the reel and JP said it wasn’t moving. “I think it’s a snake, JP. I’ll probably have to break it” I took the rod and gave it a tug. It wouldn’t budge.

Then suddenly, it came free. I felt the thump. I threw the rod back into JPs hands. ” it easy JP; you’ve got a slob on your line. ” JPs face went from smile to total seriousness. This was the one- Troutzilla. I quickly raised the right downrigger to get the cable out of the way. The fish had already tangled w the center line. And I could see it riding up and down on JPs light six-pound test. We cut the line and brought it in by hand. Now I would raise that cable. “JP- see if you can lead him to the right so he stays away from the left cable. Pat…jump on the wheel, when I tell you to pop us into gear, push the black lever forward. We need to keep the fish free from getting under the boat and near the props. ” The fish suddenly came straight at the boat. He’s going under the boat. ” Put us in gear “, I shouted. Pat popped us forward. This went on for 10 to 15 minutes with the fish sounding under the boat several times. Pat was doing a great job on the wheel. And JP was playing Troutzilla on the 6-pound test like a pro. I was standing at the ready with the net. Suddenly, I saw a flash, ” there she is! Wow. It’s a slob. Slow and steady JP. She’s coming up. “She surfaced and I frantically got the net under her. “She’s yours, JP. ” JP was going nuts. I was pretty excited myself. We were going to release her but JP asked his mom if he could have the fish mounted for his wall. She said he could. And we took lots of pictures. And spent the next couple minutes laughing while we discussed the whole scenario over and over. On our way back in, JP looked at that fish in the cooler about 50 times, just laughing. As a Captain, there’s no greater joy than providing a day like this for a young person. Rain, wind, snow, days like this make it all worthwhile. Enjoy the pictures. IF you’d like your shot at Troutzilla, book a charter on Lake George. It was nice having your aboard JP…Keep on fishing… 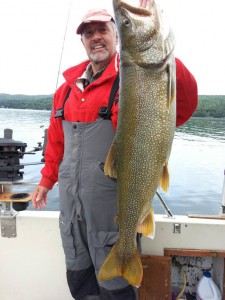 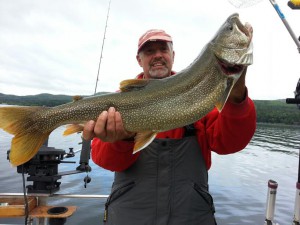