We urge everyone to contact individual businesses to confirm their hours of operation before visiting, while we flatten the curve through social distancing.
Plan Lake George Fun On LakeGeorge.com!
Find a Business Enter Giveaways Advertise
Note: LakeGeorge.com is not responsible for posts and comments written by non-staff members.
Home  »  Uncategorized  »  The big WHY in fishing – a double digit answer 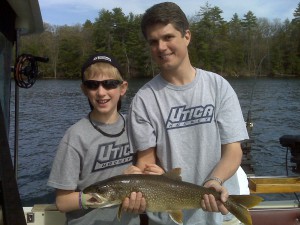 The last week started slowly and then turned right back on to double digit days. WHY? I may sound a little bit ridiculous or superstitious even, but I think I know the reason- WHY? I know lots of fishermen would say that’s “why they call it fishing not catching”. But I believe most times there is a reason for the fishing to change abruptly. Of course there are the obvious exceptions, pressure changes, storm fronts, seasonal bait migrations and so on. But we’re talking about abrupt changes that occur when conditions are right. We boated fish on all trips. The problem was that for the time effort spent fishing the numbers  were not good by the “Highliner” standards. WHY?

After Bud Larose, Dan Ladd from the chronicle and Ralph and his boys all endured a slow day, again I asked myself WHY? I started going over everything: lines, lures tuned, downrigger weights running right, speed reading right, depth counter correct on and on. Then I remembered something I did recently. I had opened a fuel by-pass valve on my gas tanks below. Could that possibly be making some sort of sound or conducting an electrical current in the water around the boat? I know it sounds crazy, a little over the top, but hey people, this is fishing we’re talking. I immediately pulled the hatch, jumped below and closed the valve.WHY? Because this could be it. The reason! I went over the morning gear one last time. I went home and slept restlessly. At 7:30am we were setting our lines, 3 lines down one to go. Bang! Fish-On. We boated nine lakers with 4 keepers up to 30″.A half dozen or so large and smallmouth bass were also landed. The rest of the week stayed the course.

Long time “Highliner” fishermen and good friends Dick and Rich Pescke landed double digits with six keepers up to 30″.Rich’s son David shared the landing of the 30″ with Pat. They also landed and released several bass including a behemoth 5lb smallmouth. Dick landed on 5 lb test line. Kurt and Eric Bremmer spent an afternoon on board the “Highliner”with their boys and landed some nice keepers. Brian took big fish honors. Rick, Dan, Sandy and Jonathan also had a great day on the Highliner. It’s always a pleasure to fish with such nice folks.

So back to the question WHY? Maybe I am superstitious or a little over the top when it comes to fishing. All I know is fishing improved after I closed the valve! Was it really the valve or just the nature of fishing? Personally if conditions are right and fishing is poor, I believe there is a reason WHY? and that’s WHY-I think you should never feel strange asking yourself WHY?